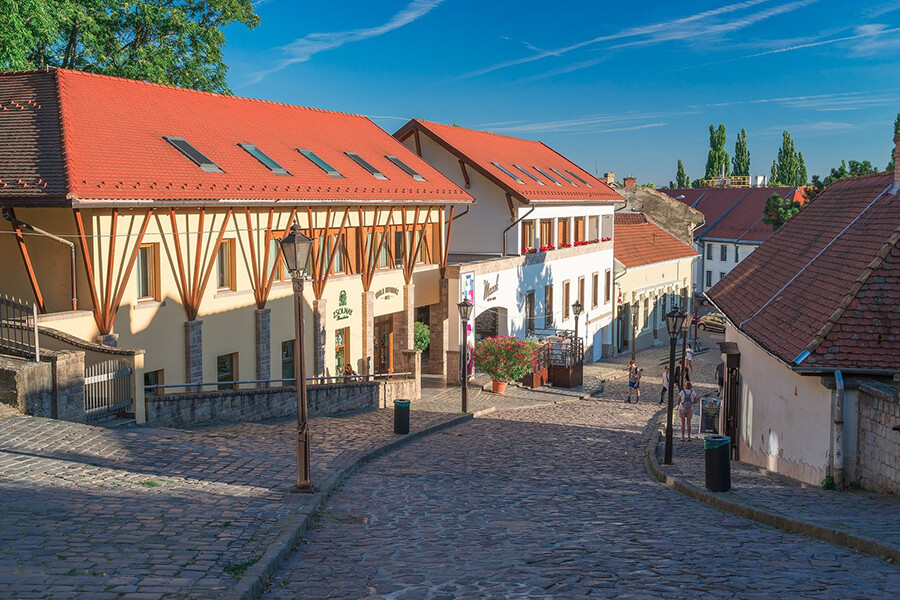 The quaint streets of Eger

Hungary is a landlocked country located in Central Europe and renowned for its vital folk art, magnificent architecture, gentle scenery, thermal spas, language and exquisite cuisine. From medieval castles to Roman ruins, from glorious nature to some of the most sophisticated cooking in Europe, Hungary has always marched to its own drumbeat.

Morning: Departure and flight to Budapest.

Afternoon: Welcome to Budapest! Upon arrival, meet your travel guide and transfer to the hotel. Check in and freshen up.

Morning: After a refreshing breakfast, take a tour through one of the greatest cities in Europe and visit its most prominent landmarks. Budapest is an architectural treasure trove. You will see Castle Garden and The Great Market Hall, visit the stunning Basilica, stroll down the lush Andrassy Avenue and then, over the beautiful Chain Bridge.

“The former Royal Palace has been razed and rebuilt at least half a dozen times over the past seven centuries. Béla IV established a royal residence here in the mid-13th century, and subsequent kings added to the complex. The palace was levelled in the battle to drive out the Turks in 1686; the Habsburgs rebuilt it but spent very little time here. The Royal Palace now contains the Hungarian National Gallery, the Castle Museum, and the National Széchenyi Library.”

Afternoon: After lunch, embark on a cruise on the Danube River and take in the staggering views of the city. You will sail past Margaret Island, Watertown, the universities of Buda and Pest, the National Theater, Castle Hill and all of the astonishing bridges of Budapest.

Morning: Enjoy a delicious breakfast at your hotel. Today you will enjoy a guided tour of Hungary’s parliament which is the third largest Parliament building in the world built in the Gothic Revival style. Admire its lavishly decorated central staircase, the Hungurian Crown Jewels and the Hungurian Holy Crown. The structure was planned out by the famous Hungarian Architect Imre Steindl and extends out along the Danube River from the Margaret Bridge to the Chain Bridge.

Afternoon: After lunch, you will have the afternoon to yourself. Explore, shop and discover Budapest at your own pace. You can choose to visit the magnificent Castle Hill and the Great Synagogue.

Morning: Enjoy breakfast at your hotel! Budapest is famous for its hot springs and thermal baths. Today you will enjoy a full day at Budapest’s world-famous thermal spring Spa- Szécheny Bath. It was built in a Neo-baroque style in  1913 and consists of 15 indoor and 3 outdoor pools.

Afternoon: After lunch, you have a choice to continue enjoying the hot springs swimming and relaxing or take the afternoon to explore, shop and discover Budapest at your own pace. Visit Memento Park or the Basilica of Saint Stephen.

Evening: Enjoy a delicious meal and return to your hotel for a rest.

Morning: After breakfast at your hotel, embark on an exciting adventure to Lake Balaton. Spend an amazing day on the northern shore, cruise on a ship in Balantonfüred, and explore a natural reserve with a breath-taking lake view. Lake Balaton is known as the Hungarian Sea and is the largest freshwater lake in Central Europe. You will enjoy the atmosphere of the 18th century villas and stroll down leafy avenues. Then take a boat cruise on the beautiful lake.

Afternoon: After lunch, stop and go for a swim. Afterwards, you will drive to Tihany Peninsula which is a stunning natural reserve at Lake Balaton. Marvel at the magnificent view of the lake from beautiful Abbey Hill. and lastly, explore the inner lake and take in the beautiful views of lavender fields.

Evening: Enjoy a lovely meal at a local restaurant and get a well deserved rest at your hotel.

Morning: After breakfast at your hotel, you will travel to the scenic town of Eger. Visit Eger Castle built in the 13th century situated at the top of Doózsa György Tér. See  the Turkish minaret and enjoy the thermal baths of Egerszalók. You will explore the renowned Specula and Planetary Museum and see the baroque Minorite Church.

Afternoon: After lunch, continue to Egesrzalók and relax at one of the most wonderful spas in town where the 2 thermal springs come out as geysers and the medicinal water is highly healing.

Evening: After arriving back in Budapest, meet for a farewell dinner with your group. Return to hotel and rest before your trip back home.