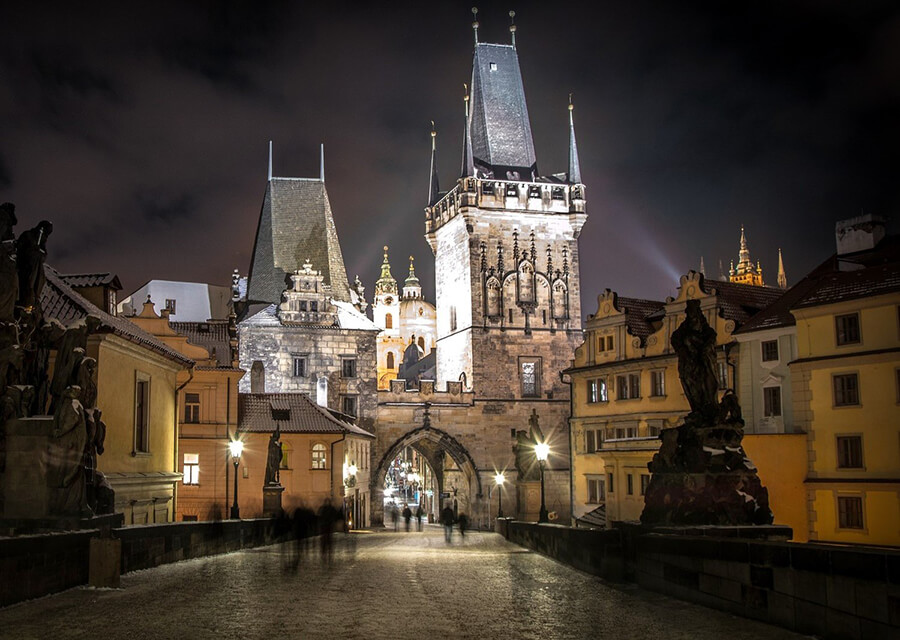 Czech Republic, also called Czechia is a country located in Central Europe and is comprised by the historic provinces of Bohemia, Moravia and Silesia. Czech Republic is called “the handsomest city in Europe” and its capital Prague has a magical quality to it. Set on the Vltava River, this stunning city is full of exquisite work from generations of artists. The Czech Republic is a celebration of culture and one of Europe’s most popular travel destinations.

Morning: Departure and flight to Prague.

Afternoon: Welcome to Prague! Upon arrival, meet your travel guide and transfer to the hotel. Check in and freshen up!

Morning: After a refreshing breakfast, you will have the opportunity to visit Prague’s most famous attraction – the fairy tale-like Prague Castle. Discover the highlights of the castle and learn about its history and amazing art. Marvel at the St. Vitus Gothic architecture and gargoyles. Admire the Art-Nouveau stained glass window by Alfons Mucha and the 14-th century mosaic of the last judgment. Explore the Royal Palace and stand under the stunning vaulted ceiling of Vladislav Hall. Visit the grandiose Basilica of St. George and see frescoes from the 12th-century. Walk through the Golden Lane, see cottages built originally for the castles sharpshooters and a house where artist Franz Kafka used to live. You will see the workshops and homes of the Golden alley and learn how working people lived.

Afternoon: After lunch, you will embark on a sightseeing cruise to Devil’s Channel and admire the medieval houses along the banks of the Vltava River. The channel is said to have been named after a woman with devilish character in 19-th century. It divided Malá Strana and Kampa Island. During your cruise, enjoy views of Prague Castle from the water, marvel at the magnificent Charles Bridge and observe the medieval houses that appear to be growing out of the water. See one of Prague’ s most preserved mills, the Grand Priory Mill, and the Devils Channel itself from up close.

Morning: Enjoy a delicious breakfast at your hotel. Today you will travel to one of the most cultural cities in the Czech Republic – Pilsen and go on an exciting gastronomy tour. Pilsen has always been a regional center for industry, religion, education, gastronomy and culture and in 2015 won the prestigious European Capital of Culture Award. Explore the Old Town and its secret spots while learning about history, people and culture. Visit St. Bartholomew’s Cathedral and the 3rd largest Synagogue in the world. Learn about the cuisine and eating habits of the Czech people and taste traditional snacks.

Afternoon: After lunch, you will have the afternoon to yourself. Explore, shop and discover Pilsen at your own pace.

Evening: Return to Prague and find a restaurant to enjoy a delicious local meal.

Morning: Enjoy breakfast at your hotel! Today you will explore the UNESCO World Heritage Site Kutná Hora. You will see the late Gothic St. Barbara’s Church and explore its surroundings. Enjoy walking through the town center and later, visit the chapel of human bones at the Roman Catholic Cemetery Church of All Saints. Then, explore the Ossuary underneath.

Afternoon: After lunch in Kutná Hora, you will return to Prague and have a chance to rest or continue exploring Prague. You can choose to see a charming performance from a 19-th century music salon – Dvorák Classical Concert.

Evening: In the evening experience the sensational 1-hour theatrical show “Phantom” and see the only theater group of the “Black Theater” genre working in the Czech Republic. It is distinguished by the use of black light illusions and originated in Asia. After the show, enjoy a delicious meal and return to your hotel for a rest.

Morning: After breakfast at your hotel, you will have the opportunity to experience the one-of-a-kind Museum of Senses with a world of mind-boggling optical illusions and fascinating interactive exhibitions. It will make you laugh and challenge your perception of reality. The museum has around 50 exhibits and awakens all of your senses at once. Dance to fun music in the infinity mirror room and take pictures to share with your family and friends.

Afternoon: After lunch, explore the mystery and hidden treasures beneath the city by going on a medieval underground tour. Discover vestiges of a forgotten city and see Prague in a completely different way. See underground corridors and rooms and listen to stories about the mysterious old walls that were once home to the people living there.

Evening: Meet for a farewell dinner with your group. Return to hotel and rest before your trip back home.